We've just published the proof of concept code for the Alex's and Rafal's "Ring -3 Rootkits" talk, presented last month at the Black Hat conference in Vegas. You can download the code from our website here. It's highly recommended that one (re)reads the slides before playing with the code.

In short, the code demonstrates injection of an arbitrary ARC4 code into a vPro-compatible chipset AMT/ME memory using the chipset memory reclaiming attack. Check the README and the slides for more information. 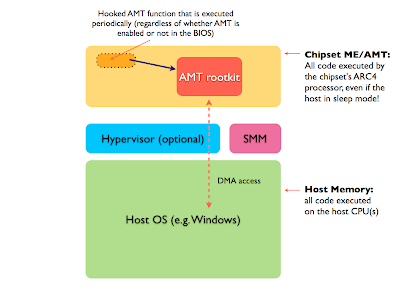 The actual ARC4 code we distribute here is very simple: it sets a DMA write transaction to the host memory every ca. 15 seconds in order to write the "ITL" string at the predefined physical addresses (increased by 4 with every iteration). Of course one can do DMA read as well. 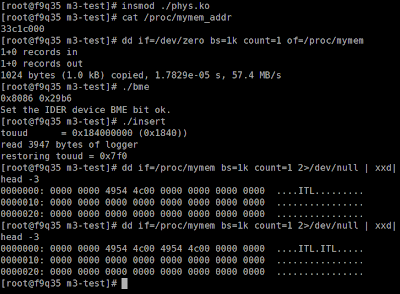 The ability to do DMA from the ARC4 code to/from the host memory is, in fact, all that is necessary to write a sophisticated rootkit or any sort of malware, from funny jokers to sophisticated secret sniffers. Your imagination (and good pattern searching) is the only limit here.

The OS, nor any software running on the host OS, cannot access our rootkit code, unless, of course, it used the same remapping attack we used to insert our code there :) But the rootkit might even cut off this way by locking down the remapping registers, so fixing the vulnerability on the fly, after exploiting it (of course it would be insane for any AV to use our remapping attack in order to scan ME space, but just for completeness;)

An OS might attempt to protect itself from DMA accesses from the rootkit in the chipset by carefully setting VT-d protections. Xen 3.3/3.4, for example, sets VT-d protections in such a way that our rootkit cannot access the Xen hypervisor memory. We can, however, access all the other parts of the system which includes all the domains memory (i.e. where all the interesting data are located). Still, it should be possible to modify Xen so that it set VT-d mappings in such a strict way, that the AMT code (and the AMT rootkit) could not access any useful information in any of the domains. This, in fact, would be a good idea anyway, as it would also prevent any sort of hardware-based backdoors (except for the backdoors in the CPU).

An AMT rootkit can, however, get around such a savvy OS because it can modify the OS's VT-d initialization code before it sets the VT-d protections. Alternatively, if the protections are set before the rootkit was activated, the rootkit can force the system to reboot and boot it from the AMT Virtual CDROM (In fact AMT has been designed to be able to do exactly that), which would contain rootkit agent code that would modify the OS/VMM to-be-loaded image, so that it doesn't setup VT-d properly.

Of course, the proper solution against such an attack would be to use e.g. Intel TXT to assure trusted boot of the system. In theory this should work. In practice, as you might recall, we have already shown how to bypass Intel TXT. This TXT bypass attack still works on most (all?) hardware, as there is still no STM available in the wild (all that is needed for the attack is to have a working SMM attack, and last month we showed 2 such attacks — see the slides for the BIOS talk).

Intel has released a patch a day before our presentation at Black Hat. This is a cumulative patch that is also targeting a few other, unrelated, problems, like e.g. the SMM caching attack (also reported by Loic), the SMM nvacpi attack, and the Q45 BIOS reflashing attack (for which the code will be also published shortly).

Some of you might remember that Intel has patched this very remapping bug last year, after our Xen 0wning Trilogy presentations, where we used the very same bug to get around Xen hypervisor protections. However, Intel forgot about one small detail — namely it was perfectly possible for malware to downgrade BIOS to the previous, pre-Black-Hat-2008 version, without any user consent (after all this old BIO file was also digitally signed by Intel). So, with just one additional reboot (but without a user intervention needed) malware could still use the old remapping bug, this time to get access to the AMT memory. The recent patch mentioned above solves this problem by displaying a prompt during reflash boot, if reflashing to an older version of BIOS. So now it requires user intervention (a physical presence). This "downgrade protection" works, however, only if we have administrator password enabled in BIOS.

We could get into the AMT memory on Q35, however, even if the downgrade attack was not possible. In that case we could use our BIOS reflashing exploit (the other Black Hat presentation).

However, this situation looks differently on Intel latest Q45 chipsets (that also have AMT). As explained in the presentation, we were unable to get access to the AMT memory on those chipsets, even though we can reflash the BIOS there, and consequently, even though we can get rid of all the chipset locks (e.g. the remapping locks). Still, the remapping doesn't seem to work for this one memory range, where the AMT code resides.

This suggest Intel added some additional hardware to the Q45 chipset (and other Series 4 chipsets) to prevent this very type of attacks. But we're not giving up on Q45 yet, and we will be trying other attacks, as soon as we recover from the holiday laziness ;)

Finally, the nice picture of the Q35 chipset (MCH), where our rootkit lives :) The ARC4 processor is somewhere inside... 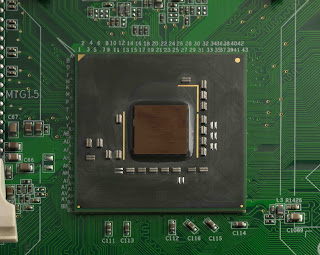