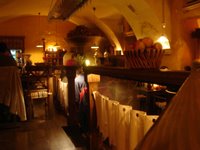 It was also very positive to see how enthusiastic those people are and it was clear to me that they really do this conference for fun and not for profit. I wish them success with the next edition in 2007!
Posted by Joanna Rutkowska at Wednesday, May 17, 2006

What do you think about opening a photo gallery to cover trip reports like this? :)

maybe I will consider doing this after the conference in Taganrog ;)

It's been really nice to see you there, J :)

Holy cow, is this Taganrog in Russia? Do they have a security conference there, really?

Dear J ,
its nice to see you blog too , i really like your tools and articles , hope this way you will be in touch more than before :P